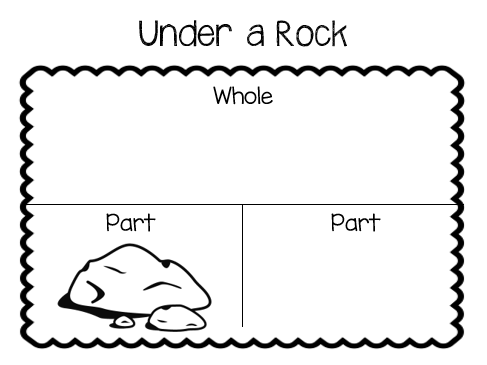 One of the reasons I love teaching math is that it is so much different now than when I was in elementary school (Google paleolithic age for a frame of reference).  Take composing and decomposing numbers.  I don’t remember ever “playing” with numbers.  I learned to count, I learned to write my numbers, I learned addition and subtraction facts, but I don’t remember ever learning that there are lots of ways to make 5, or any number for that matter.  John Van de Walle devotes pages to explaining the importance of composing and decomposing numbers, and parts and wholes (also called part-part-whole) are foundational to Singapore Math.

Under a Rock is my take on an activity that is commonly used in classrooms to explore parts and wholes.  In this activity, the child knows the whole and one of the parts.  It is their task to determine the missing part.  Do you hear the algebraic thinking going on there?  Students will work with a partner, and each pair of students needs counters and a plastic cup (can’t be transparent).  Students choose, or are given, a target number.  They count out that many counters and the number is recorded as the whole.  Player 1 covers his/her eyes, while Player 2 puts some of the counters “under the rock” (the plastic cup).  Player 1 opens his/her eyes and tries to determine how many counters are under the rock.  The cup is lifted to check Player 1’s answer, and the two parts are listed on the recording sheet.  The partners repeat the process with another combination for the target number.  Oh, did I mention that this is concrete learning, so there’s that CRA sequence of instruction again! 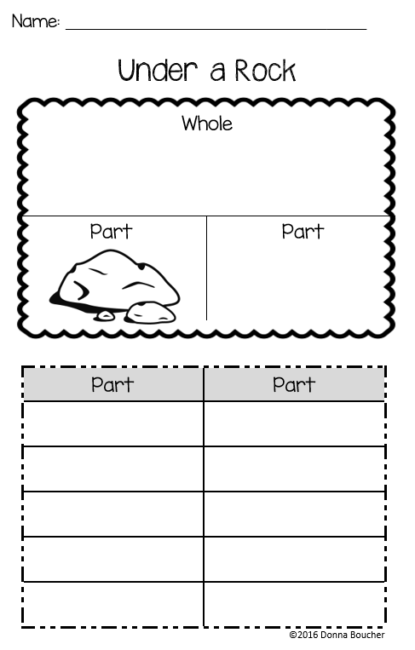 Click here to grab your freebie!  I hope you enjoy this activity!  For another great composing/decomposing activity, check out Composing and Decomposing Numbers with Dot Cards at my TPT store. 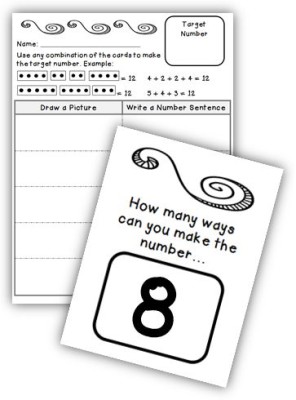