Extending Odd and Even to Larger Numbers

By 1st grade, students learn to determine if small numbers are odd or even by pairing up objects.  For example, if students count out 8 objects, they can make 4 pairs, so the number is even.  With the number 9, however, there is an “odd” man out.  But we want students in higher grades to understand that we can easily tell if ANY number is odd or even by looking at the digit in the ones place.  As with any other concept, however, if we just tell them the “rule”, it doesn’t have meaning for them. So here’s a way to build meaning.

When children first begin to build numbers and explore place value, Van de Walle states they should use groupable materials, like linking cubes, because the ones can be joined together to make a ten and broken apart again into ones.  This mini-lesson assumes that students have been praciticing building 2-digit numbers with linking cubes.

Ask students what they remember about odd and even numbers (even numbers have pairs, odd numbers have one left over).  Ask students to use the linking cubes to show the number 8 and ask them to show if it is even or odd (students will probably pair up the linking cubes into 4 groups of 2).  Repeat using a couple more small numbers, both even and odd, to make sure the students remember the concept.

Now ask the students to build the number 24 (see picture below).  Ask them to work with their partner to decide if the number is even or odd.  This should be fairly easy for them.  They will divide the linking cubes into two groups as shown below.  Start an anchor chart with columns for Even and Odd, and list 24 under the even column.

Next have the students test the number 27.  Again, this should be fairly straightforward, because they’ll put a ten in each group and the ones won’t divide evenly into two groups.  List 27 under the odd column. Repeat with the numbers 25 and 46.

The next number for the students to try is 30.  This one will give them a bit more trouble, because they can put a ten in each of the two groups, but then they are left with a ten.  Hmmmm.  It’s likely that at least one pair of students will figure out that they can break the ten into two groups of 5.  Let them explain their thinking to the class. 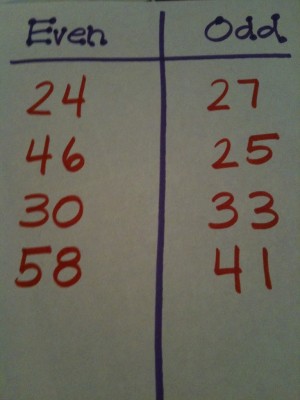 Extend the lesson by asking students to suggest numbers for either the odd or even column (Example, I think 31 should go in the odd column) and have the class prove if the statement is true or false.

If you’re looking for more odd and even activities, check out Odd Man Out: Exploring Even and Odd Numbers to 20.