A Mathemagician’s Game for Making Ten 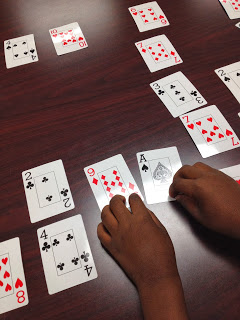 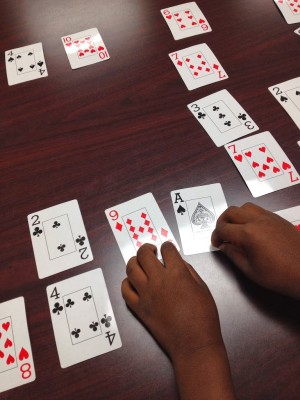 Tuesday afternoon, my second grade buddy, Dominion, burst into my room to show me a magic trick!  He held out a deck of cards and gave me the old line, “Pick a card, any card.”  He told me to look at my card, but keep it private.  I looked, and it was the 8 of clubs.  We set it, face down, off to the side.  He then proceeded to tell me that we needed to lay down all the other cards, face up, in an array.  Once we had them all laid out (I noticed there were no face cards), he told me that we would take turns picking up pairs of cards that combine to make ten.    As you can see in the picture, he chose an ace (1) and a 9.  Each time we picked up the cards, we had to say the fact.  We could also take the 10 card, but we had to say, “10 + 0 = 10”.  We took turns, and the cards began to disappear.  Finally, we were down to one card, a 2.  Dominion proudly told me that he could now guess the card I had chosen.  With great fanfare, he told me it was an 8.  Awesome “trick”, right?  🙂