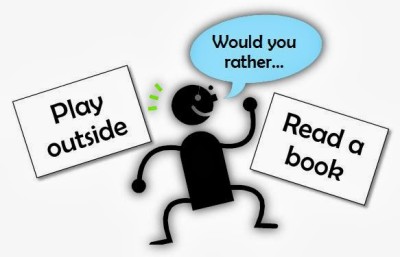 In my role as a campus-based math instructional coach, I work mostly with teachers–assisting with planning, providing professional development, modeling, etc.  But I also get to work with 3rd and 5th grade students as part of the Learning Together program.  In this peer tutoring program, 5th grade students tutor 3rd grade students in math.  Very neat program!  Yesterday, I had my Scholars Institute with the 3rd grade tutees, and I had planed an icebreaker activity called Would You Rather?  Basically each kiddo writes two options on an index card, for example play outside or read a book. I collected all the cards and for each card, I read the two options, held out my arms, and the kiddos moved to the side they would choose.  So, you might end up with four kiddos on the play outside side and six on the read a book side.  I hadn’t meant for it to be a math activity, but it seemed too perfect for comparison subtraction to pass up!
With the four on one side and six on the other, I asked, “How many more of you would rather read a book than play outside?”  What do you think the first answer (from pretty much all of them…) was?  If you guessed six, you’d be right.  That is the most common wrong answer for comparison subtraction–instead of looking at only the difference, they just tell you the bigger number.  So, one-by-one, I moved the kiddos from the play outside side to stand next to a kiddo on the read a book side.  Then I asked again, “How many MORE of you would rather read a book than play outside?” Still six.  So I showed how each of the read a book students had a play outside partner right up until four, but that two MORE students had voted for read a book. Ah!  Light bulbs!
We continued going through the cards they had written, acting out the comparison subtraction, and it seemed to make a big difference in their understanding.
BTW, my favorite card…Would you rather drink spoiled milk or eat moldy cheese?  I saved that one for last!

← Prev: iPad Apps for Model Drawing Next: Math in the Pumpkin Patch →