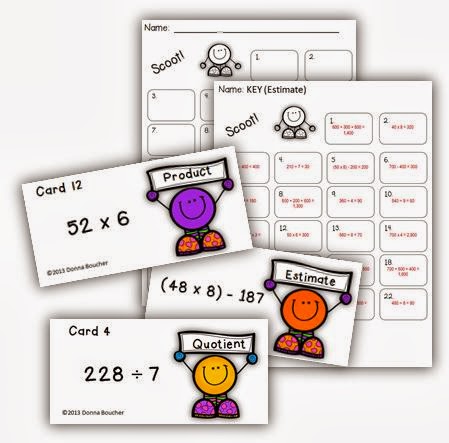 There are two primary reasons to estimate: (1) to be able to mentally calculate when an exact answer is not necessary, and (2) to determine the reasonableness of a solution.  It’s really important that students understand that an estimate is either done before or in place of the actual answer.
Let’s take the first scenario above.  If an exact answer is not needed, you would do the estimate in place of finding the actual answer.  A common mistake that many kiddos make is that they calculate the exact answer and then round it.  That’s way too much math to do if an exact answer is not necessary!
Looking at the second scenario, we are estimating to help determine if our actual answer is reasonable.  In this case, you would estimate before calculating the actual answer.  You want students to have an idea of the magnitude of their actual answer before calculating it.
While there can be several good ways to estimate numbers (and that’s a great conversation to have with students!), for these activities I have followed certain conventions.  For addition, subtraction, and multiplication, numbers are rounded to the largest place value.  For example, 2-digit numbers are rounded to the nearest 10 and 3-digit numbers are rounded to the nearest 100.  For the division problems, the numbers are rounded to numbers that are compatible with the divisor.  For example, in the equation 496 ÷ 6, the 496 is rounded to 480, because 480 is easily divisible by 6.
The cards in this set were primarily created for an estimation scoot game, but I ended up with several different versions of the Scoot game and a couple of extensions.  The Scoot recording sheet can be used for all three versions of the game: (1) finding the estimate, (2) finding the actual answer, and (3) finding the difference between the estimate and actual answer.  Answer sheets are included for all three versions.  Note that on the third version, finding the difference doesn’t really work with the division equations.

But you can get even more mileage out of these cards!  Put them in a workstation and have kiddos write word problems to match the equations on the cards.  I call this activity You Write the Story. You could also let the kiddos practice bar model drawing by creating a model of each equation.

I’m sure you can think of others! 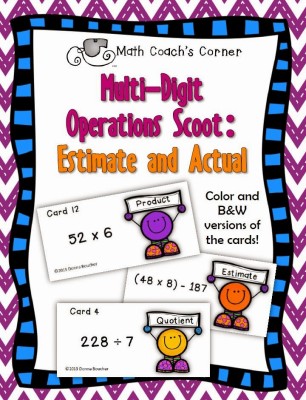 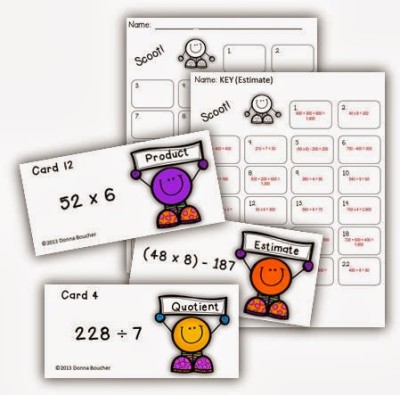 Click here to grab it from my TpT store.