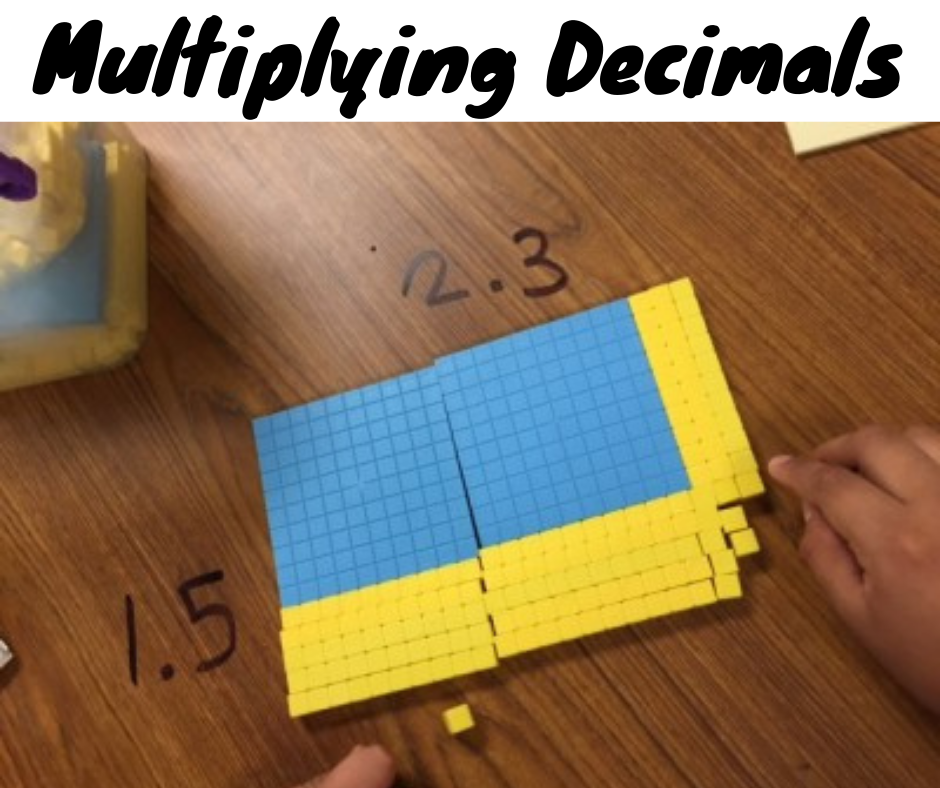 Time to bring out the base-10 blocks. As I was planning for my lesson, I thought through all the variations related to multiplying with decimals, and here’s what I came up with:

I think I got them all!

Before getting into the meat of the lesson, we had to cover some basics. First, we needed to establish the value of the base-10 blocks. When using base-10 blocks with whole numbers, the flat typically represents 100, the rod represents 10, and the cube represents 1. But when we shift to decimals, the materials take on new values. With decimals, the flat becomes the whole, meaning that it is now 1. That makes the rod one 10th, and the cube one 100th. 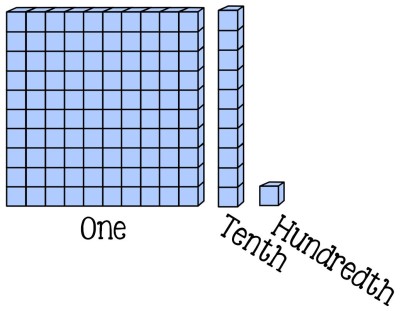 Next, I needed to make sure that the students understood how to make an area model to represent multiplication. So I asked them to use their base-10 blocks to create an area model showing 2 x 3. We labeled the sides and discussed that one side showed a length of 3 and the other showed 2.

Next up, I asked them to model 2 x 1.3. I really didn’t give them much more direction than that. I wanted to see what they would do with it. They struggled a little, but were actually very interested in the problem. I restated the problem as 2 groups of 1.3. That helped quite a bit and one of my pairs figured it out which, of course, led to a light bulb moment for the other group. We labeled the sides 2 and 1.3. I asked students to find the product, and they added the base-10 blocks and got 2.6. I pointed out that, as with whole numbers, the product was greater than either of the factors. So far so good. 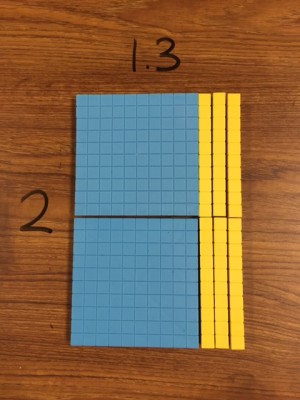 Moving down the list, I asked them to try 2.3 x 1.5. Oh, BTW, with each new problem I asked them what had changed. They had to use vocabulary like factors, whole numbers, mixed numbers, and decimals to explain the differences in the problem types. That’s a huge advantage of small group instruction–you can really focus on getting the students to use precise mathematical language.

Okay, this was a trickier one. Again, I gave them very little direction. I just kept reminding them that one side had to show 2.3 and the other 1.5. They showed the 2.3 first, quite easily. When trying to show 1.5 on the other side, they initially had the rods placed vertically. I just rotated them so they were horizontal. Then I told them they had to fill it in to make it into a rectangle. They actually figured out on their own that they would need to use 100ths. Pretty cool! Once they had filled out their rectangle, I again asked them to find the product. Notice that this time they had to trade ten 10ths to make a 1. They found the correct solution of 3.45. I asked if the product was greater than or less than the factors. They said greater. 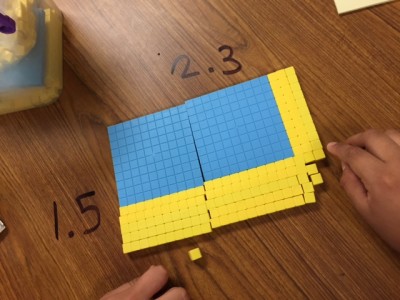 When we get ready to connect the manipulatives to the standard algorithm, they can draw their models and see why we place the decimal where we do in the product. So much better than just teaching tricks! 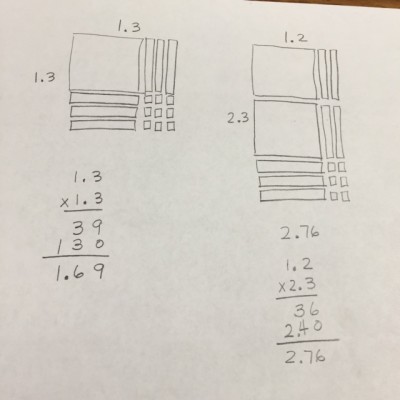 Finally, we were ready to move on to a decimal by a decimal. I really played up the drama, telling them with great flourish that next I was going to show them something that would blow their minds! Time to move to grid paper and attempt multiplying a decimal by another decimal. I wrote 0.7 x 0.4 on the whiteboard and asked what was different now. They told me that both factors were decimals. Perfect. I reminded them that one side needed to show 0.7 and the other 0.3. This I had to show them a little more directly. We used one color to color in 0.7 (red). We labeled that side to show that it had a length of 0.7. Then I showed them how to use the other color to shade 0.3 (blue), and we labeled it. I pointed out the area where the two colors overlap and explained that was the product of 0.7 x 0.3. They counted up the squares and got 0.21. Immediately, one student said, “Oh! 7 x 3 = 21!”.  I said Yes, but twenty-one what? And he told me twenty-one hundredths. Hmmmm, what do you notice about our product? Is it greater than or less than our factors? The students have just finished a unit on comparing decimals, so I was glad they could tell me that 0.21 was less than both 0.7 and 0.3. I reminded the students that we were taking something less than a whole (0.7) and we had less than a whole group of it (0.3).  That’s a really hard concept to wrap your mind around. 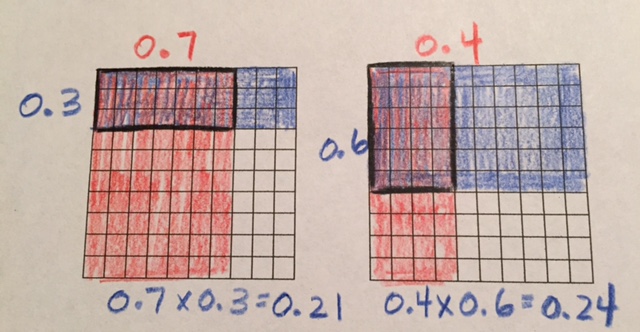 It was definitely a whirlwind tour of multiplying decimals, but I’m glad they were able to see the connections between all the different models and notice that sometimes when we multiply the product is smaller than the factors. And I’m confident that the hands-on learning together with the small group setting really helped them own the learning. I’d love to hear your comments on multiplying decimals! I’m sure you’ve got great things to share!

If you are looking for some practice resources for multiplying decimals, check out this resource, which contains an I Have/Who Has? game and matching picture/expression cards. Now in both print and digital!

← Prev: Counting Objects by Twos Next: Using Ten-Frames to Understand Numbers from 11-20 →