Kindergarten Essentials: Combinations for Numbers Through 10 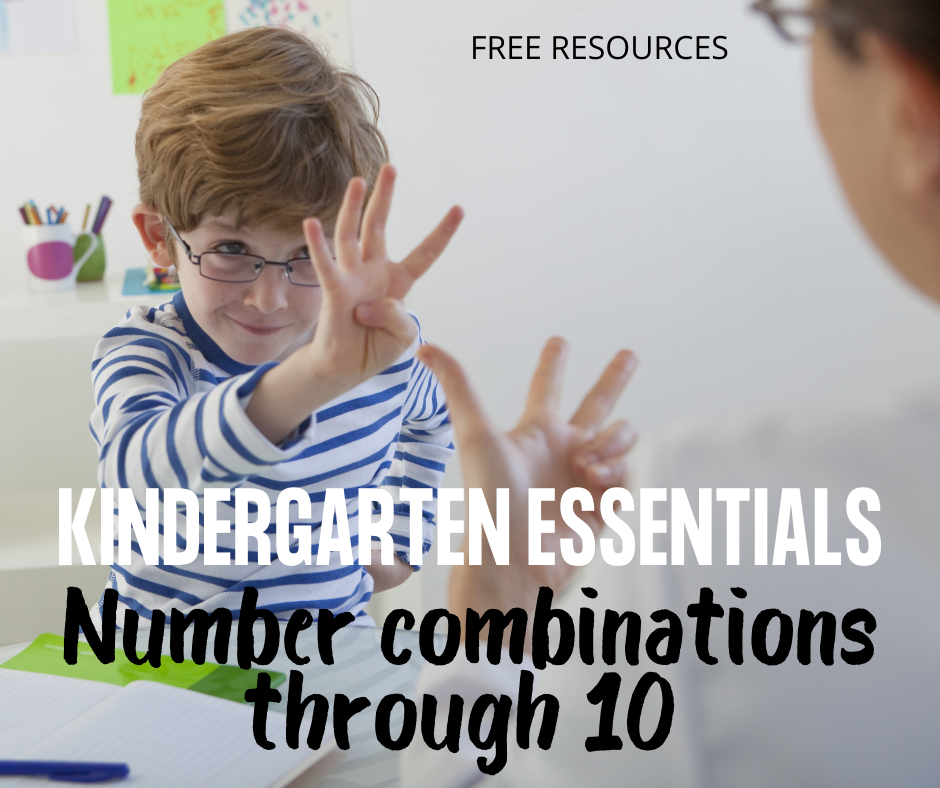 What does Kindergarten math look like? What are the essential skills that every Kindergarten student should master prior to Grade 1? Believe it or not, fact fluency starts in Kindergarten when students learn to compose and decompose numbers! Now, before you whip out those flashcards (the way many of us learned our “facts”) or start cursing me about how children are losing their childhood, read on to see exactly what I mean and for Kindergarten games and activities that are more fun than work.

This post contains affiliate links, which simply means that when you use my link and purchase a product, I receive a small commission. There is no additional cost to you, and I only link to books and products that I personally recommend.

CCSS.MATH.CONTENT.K.OA.A.4
For any number from 1 to 9, find the number that makes 10 when added to the given number, e.g., by using objects or drawings, and record the answer with a drawing or equation.

CCSS.MATH.CONTENT.K.OA.A.5
Fluently add and subtract within 5.

Need that in plain English? First of all, understand that they are sequential. In other words, each standard builds on the previous one. Read below for a translation of each of the standards. Then scroll down for additional information and for free activities to practice the skills.

Decompose Numbers in More than One Way

It’s important to understand that children should master the combinations for one number before moving on to the next. It does no good for a child to practice composing and decomposing 6 if he does not know the combinations for 5. That’s where differentiation comes in. A routine called the “hiding assessment” can be used to determine a child’s fluency with each number. To determine if a child knows all the combinations for 3, ask the child to count out 3 counters. Anything can be used as a counter–dried beans, pasta, pennies. Any small object, really. I like these small centimeter cubes because they fit easily under my hand and can be used for lots of different activities. I recommend using all of the same color, so the child focuses on the quantity, not the color. So, for example, if you are working with 5, use 5 green cubes. 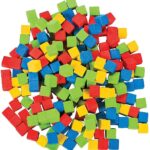 Hide some counters and show some, asking your child to identify how many are hidden. For example, hide 1 counter and show 2. “If I have 3 counters and 2 are showing, how many are hidden?” Continue this routine for each combination for 3 (hide 3, show 0; hide 2, show 1; hide 0, show 3). If your child can name all the missing parts for 3, try the combinations for 4.  When your child can no longer easily name the missing parts, that becomes her number. Every few weeks, “test” your child to determine if she is ready to move on to a new number. Here’s a video of the hiding assessment in action.

You’ll notice how this child knew the combinations for 5 automatically, but slowed down on 6, specifically, 2 and 4 for making 6. While I went on to test the child for 7, the number he needs to practice–his target number–is 6. I imagine he would only need to work on 6 for a short while. Then I would retest him for 6 and try 7. Likely, his new target number would then be 7.

Now that you’ve determined your child’s target number, it’s time to play! Remember, you can use these activities over and over with different target numbers as your child advanced.

The first game is called Shake and Spill. Basically, you use your child’s target number; let’s say 5, for example. Put 5 counters in a cup, shake it, and spill the counters onto the mat. The child then describes how many fell on the picture and how many fell off (e.g., 3 on the duck, 2 off the duck, 3 and 2 makes 5). Continue this process trying to find all the combinations for the target number. Here’s a tip. Put the Shake and Spill Mat inside something, like the box shown in the picture. It contains the “spillage.” 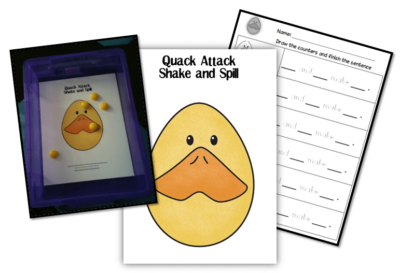 Next up is a game that can be either called In the Cave, if you happen to have teddy bear counters, or Under a Rock, if you don’t. It’s basically a game version of the hiding assessment. To play, you’ll need counters or bears and a plastic cup (can’t be transparent). Use a number of bears or other counters equal to the target number you are practicing. For example, if you are working on the number 5, use 5 bears. The child closes her eyes while you put some of the bears “in the cave” (under the cup). Then, she opens her eyes and tells how many bears are hidden. Be sure to have your child say the combination (eg., 2 and 3 makes 5) so she is practicing her combinations out loud. You can also have your child write the equation that matches each combination (eg., 2 + 3 = 5).

Here are links to posts with some other resources for practicing the combinations of each number:

Finally, here is an awesomely addictive game for practicing the combinations of any number from 5 through 12. 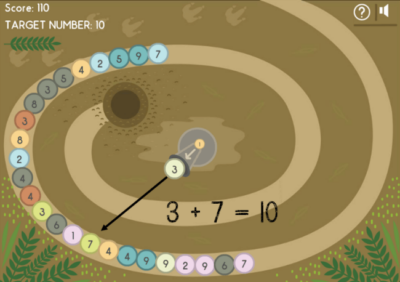 If you have additional suggestions for ways to practice this important skill, please add them in the comments!