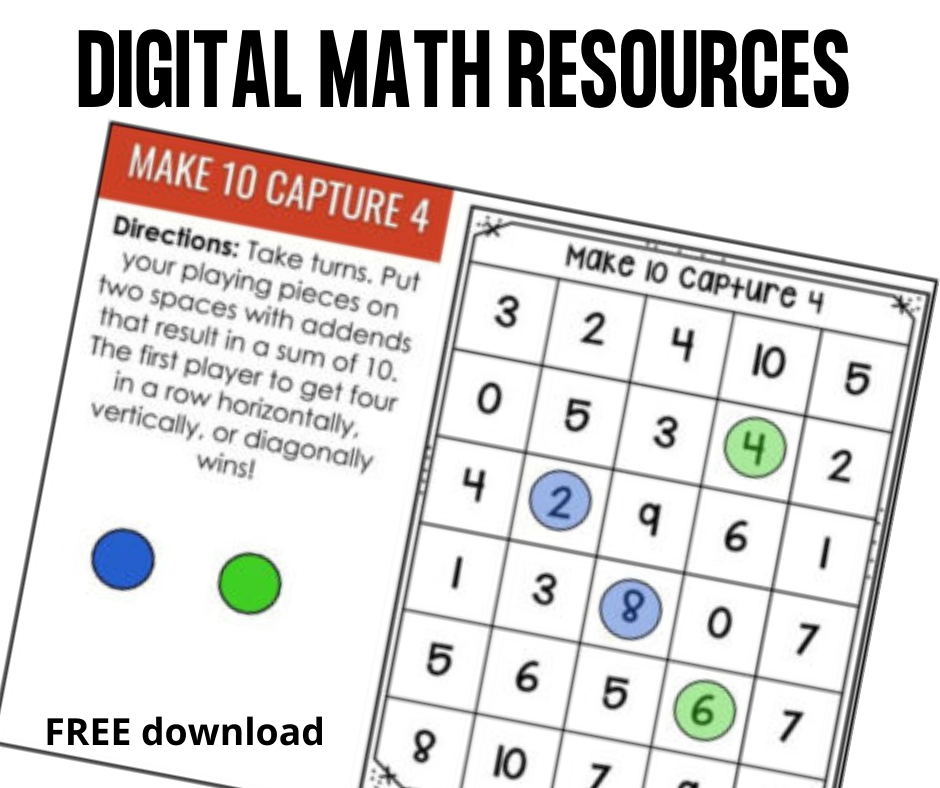 The other day, I posted a picture on Facebook and Instagram of something I was working on, and I was blown away by the response! Yes, I am working to digitize my resources. This is not only in response to the increased need for resources to support remote learning in the near future, but also to accommodate the use of technology in the classroom when school returns to normal. I will be putting a lot of effort into this project over the next couple of months (and beyond, I’m sure), so be sure you are on my mailing list to receive updates!

Capture 4 for Addition and Multiplication

You all know that I’m a big fan of low-prep, high-yield activities. When choosing games, I like to use familiar game formats, so I don’t have to spend time going over the directions each time I introduce a new game. The game is played the same, but the skill students are practicing changes. One of my favorite games is Capture 4. The goal of the game is to capture four spaces in a row, either horizontally, vertically, or diagonally. It’s similar to a tic-tac-toe game. So, for my first foray into digital resources, I made digital versions of my Capture 4 games for Addition and Multiplication. These particular games are SO low-prep that all students will need is the Google Slides™ file. No dice, no playing cards, nothing but the file.

As you see in the picture below, players take turns claiming two spaces with addends that result in a sum of 10 (since this is the board for making 10). You can see that for the first round, the blue player chose 2 and 8 and the green player chose 4 and 6. On his next turn, the blue player might choose the 9 and 1 in the same row where he has already claimed the 2. The green player would then be forced to choose the 6 on that row, along with one of the 4s, to block the blue player from getting four in a row by covering the 2, 9, 6, and 1. The green and blue playing pieces are movable, so players just slide them off the pile and over to the spaces on the board. Note that both players need to be in the same file, with edit privileges, so they can see each other’s moves and slide the pieces. Students can talk on the phone while they’re playing to provide social interaction. The resources have detailed instructions for using the digital resources with Google Classroom™ as well as information for getting started with Google Classroom™, if you’re not using it yet. 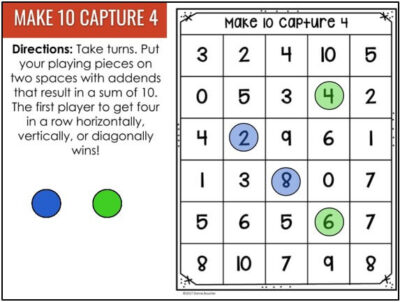 Want to check them out? I created a free sampler with one board for Addition (Make 10) and another for Multiplication (Make 24) in both print and digital versions. If you like those, check out these full versions:

← Prev: Making Ten Back and Forth Game Next: Resources for Digital Learning →