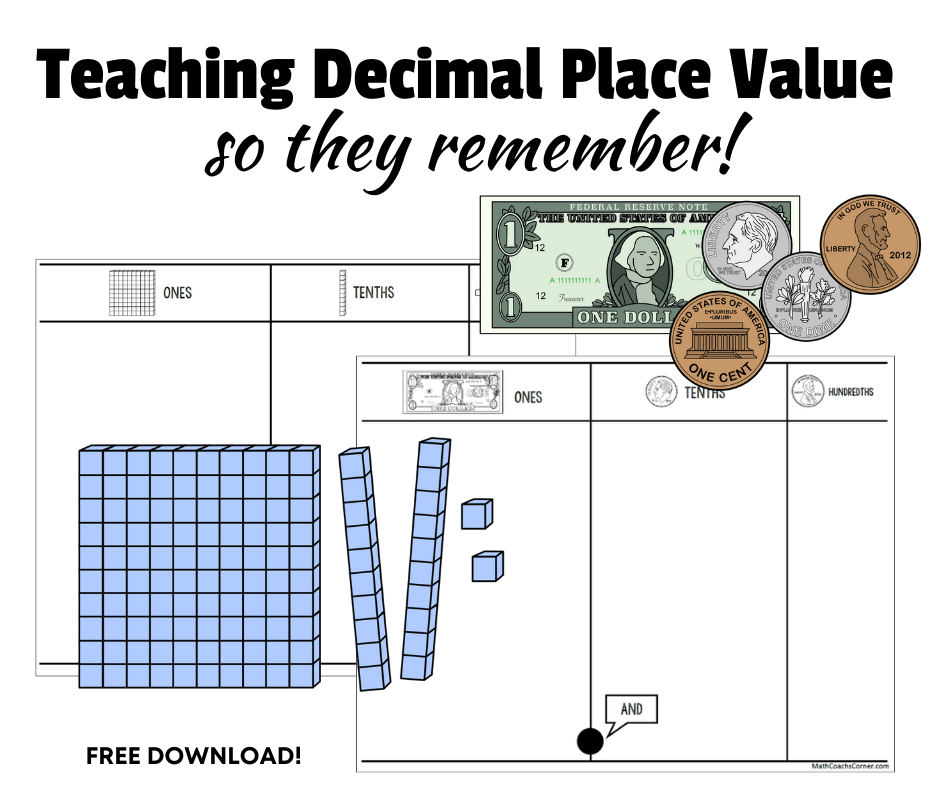 But you’ve learned this! You’ve said this, right? I know I have. We might be teaching, but are the students learning? It’s all about understanding and retention. Using models for decimal place value helps students develop a deeper understanding of place value.

Money as a Model for Decimal Place Value

Decimals are an abstract concept, and students need visual models to develop a deep understanding. Don’t skip this! I know that using manipulatives takes time, but you make up time in the long run because retention is better.

Because students use and understand money, it can be a very powerful representation for decimals. Allowing students to explore the connection between money and decimals before explicitly teaching it helps students develop their own understanding. Basically, we flip the I Do, We Do, You Do model on its head.

Marcella has $1.35 in her wallet. What combination of bills, dimes, and pennies might she have? Record the combinations you find.

Allow students time to work on the problem for a few minutes. Bring the class back together and call on pairs of students to provide one of their combinations while you record them on an anchor chart or the board. After recording a number of combinations, ask the class the following question:

How could all of these combinations represent an amount that we write as $1.35?

Of course, you are trying to draw out the place value relationships: 10 pennies equal one dime and 10 dimes equal one dollar.

As a follow-up to this lesson, students can work in pairs to play Race to a Dollar. Each player needs a money place value mat, shown below (link at the end of the post). Players use either standard or ten-sided dice to play. On a player’s turn, they roll the dice and place that many pennies on the mat. Players take turns rolling. Each time they accumulate 10 pennies, they trade them for one dime. When they accumulate 10 dimes, they trade them for one dollar. The first player to reach one dollar wins the game. You could, of course, have them play Race to Five Dollars or Race to Ten Dollars. 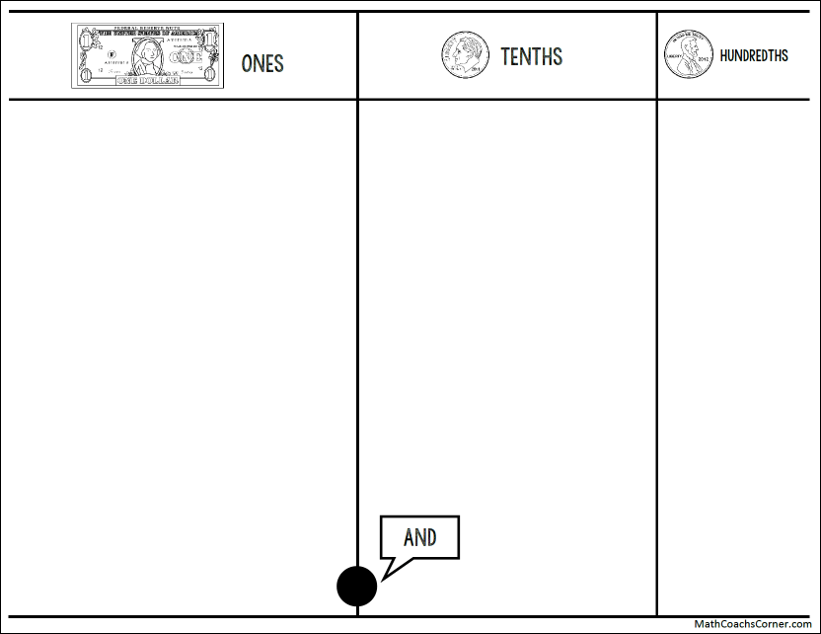 Using Base-10 Blocks to Model Decimals

When I first started teaching, I remember referring to base-10 block pieces as thousands, hundreds, tens, and ones. I was teaching 3rd grade and, like many other teachers, I only thought of them from a whole number perspective. Now, we more commonly refer to the pieces as cubes, flats, rods, and units, recognizing the fact that they can, in fact, represent decimals as well.

Let’s get the kiddos thinking again in a lesson that would best fit after students have explored decimals with money. Provide pairs of students with base-10 blocks and ask the following question:

If the value of the flat is one, what are the values of the cube, rods, and units?

Again, you could teach this concept using a very scripted lesson, but posing it as a problem to be solved allows students the opportunity to think and engage in productive struggle. Once they have a chance to work on the problem for a few minutes, bring the group back together for a discussion of their findings. If the flat is one, then rods are tenths and unit cubes are hundredths. The value of the cube might be trickier. In this scenario, the cube has a value of ten. A good follow-up question would be how this representation relates to money. Making connections always helps cement learning. Next, I might ask:

So what if the value of the cube is one instead? Then what are the values of the flats, rods, and unit cubes?

With this problem, we can extend decimals out to thousandths, something we can’t do with money.

I’m something of a data person, and I like to analyze released state test items. Preparing to write this post, I thought I’d take a look at the released items from our state test here in Texas that were related to decimals. This one caught my eye. 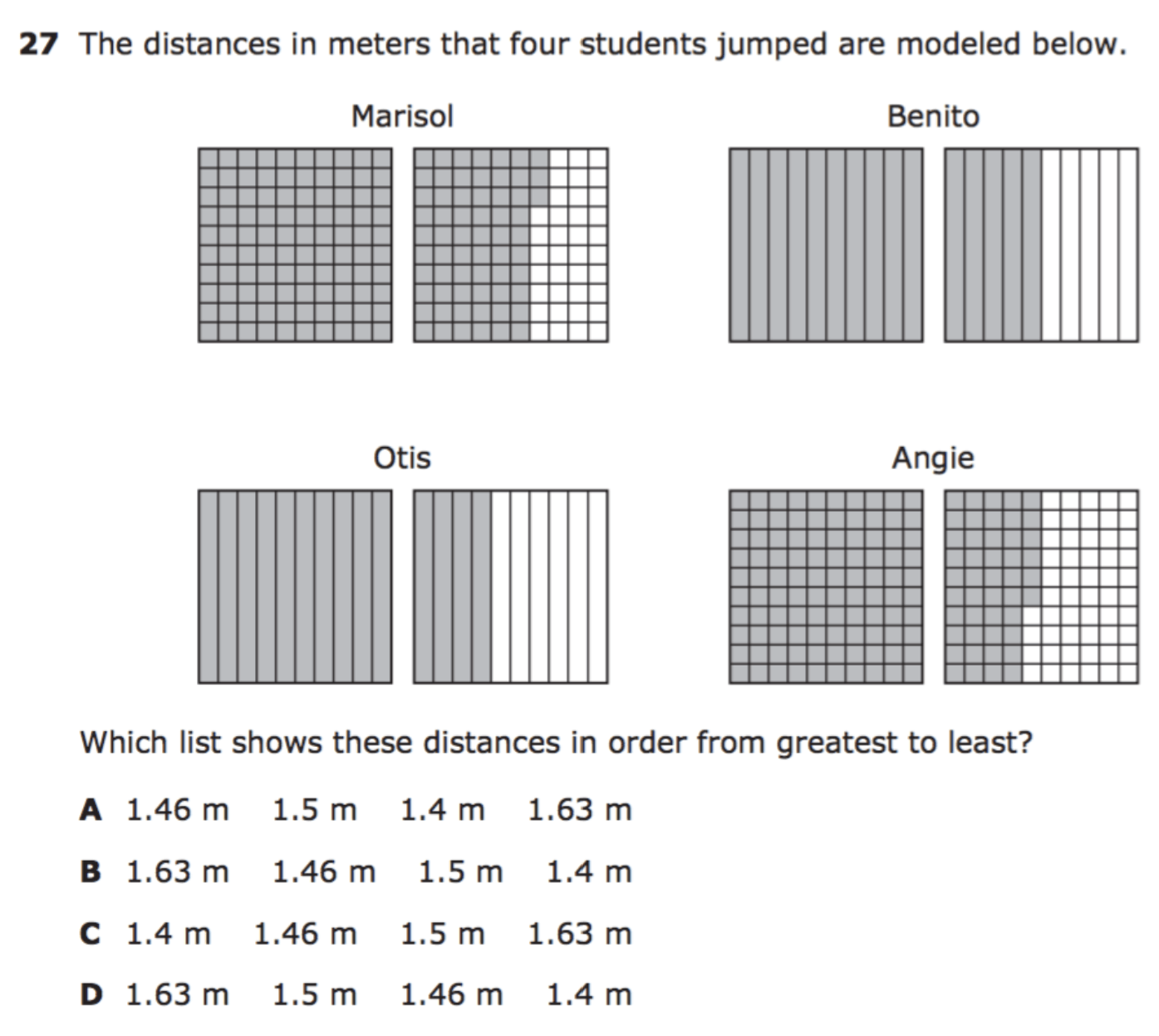 Surprisingly, only 56% of students state-wide chose the correct answer, which was D. Now, you might think that a pretty large percentage of students chose C, which shows the numbers in order from least to greatest instead of greatest to least. But, actually, only 8% of students chose that incorrect answer. Would it surprise you to know that 34% chose B? Can you figure out their error? If they chose B, they believed that 1.46 was greater than 1.5. That faulty reasoning comes from thinking that ’46’ is a 2-digit number compared to ‘5’ which is a 1-digit number. In other words, a total lack of understanding of place value. And, obviously, it’s a really common misconception.

So let’s look at a problem-solving lesson that I could give early on, before direct instruction, that might nip that misconception in the bud.

Provide students with decimal place value mats (link at the end of the post) and base-10 blocks. Pose the following problem for them to work on with a partner.

Romero says that 1.46 is greater than 1.5. Do you agree or disagree? Use base-10 blocks to explain your reasoning.

After students have the opportunity to work on the problem for a few minutes, bring the class back together for a discussion of their results. 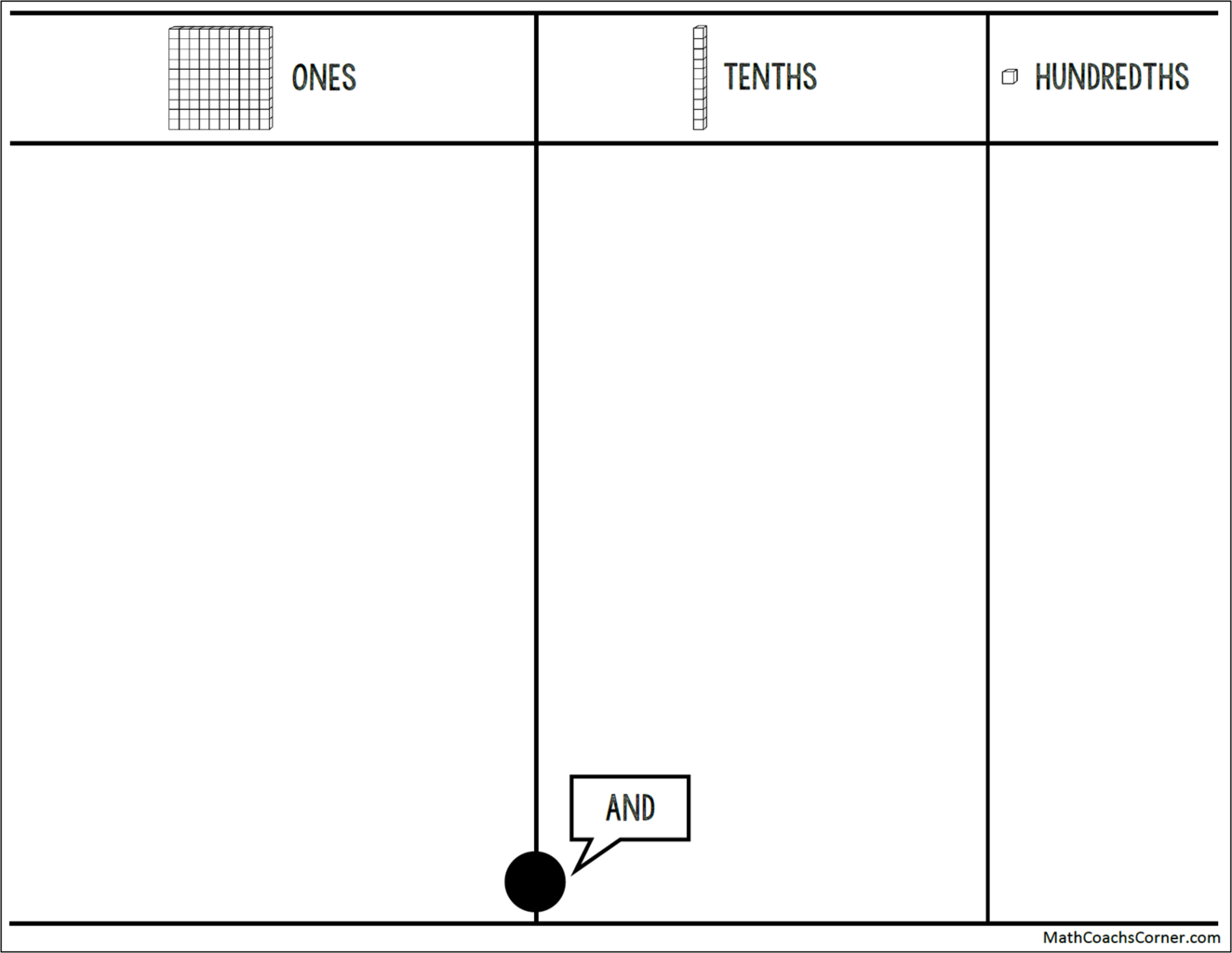 For a follow-up activity, partners can play Decimal War with these comparing decimal cards. The deck included decimals with tenths and hundredths. Each player will need the decimal place value mat and base-10 blocks. For each round, each player takes a card and builds their number on the place value mat. Players compare numbers and the player with the greatest number wins both cards.

After students have the opportunity to play the game, bring the class back together and have students explain what they learned about comparing decimals. Consider creating a class chart with a summary of the students’ explanations. Remember, the learning will be most powerful if they develop the understanding on their own, rather than passively receiving the information.

I hope you have some new ideas for helping students develop decimal understandings using problem-solving and models. Don’t forget to download your decimal place value mats!

← Prev: Computation Dice Games Next: Getting to the Heart of a Math Word Problem →