Subtraction with Regrouping: From Direct Modeling to the Algorithm 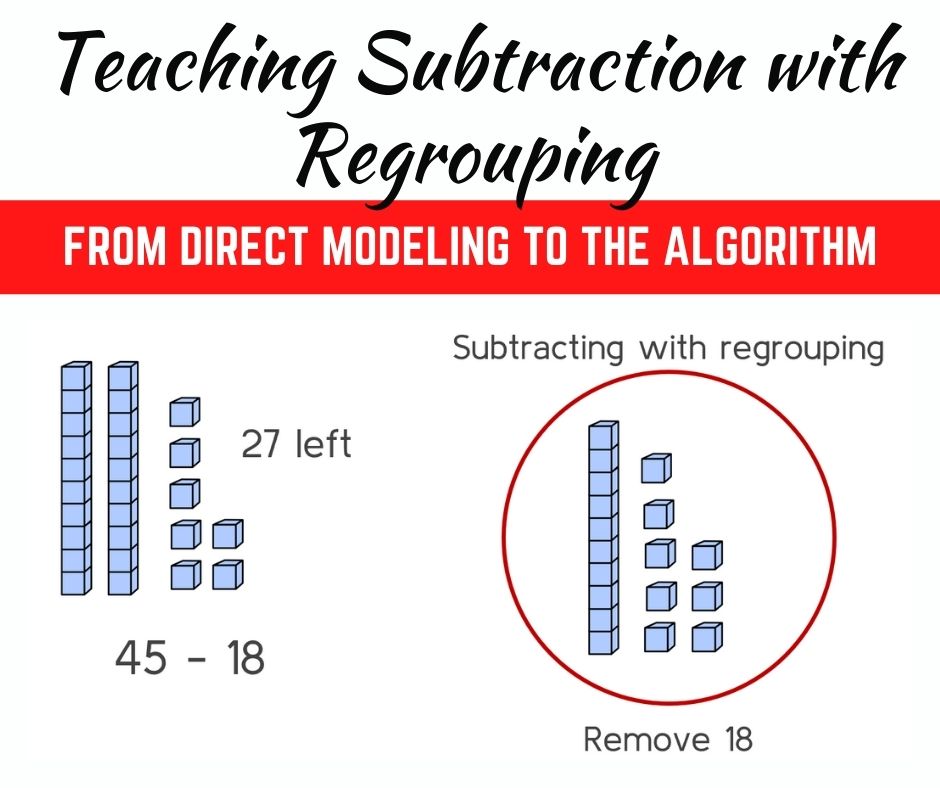 More and more curriculum maps are delaying the teaching of the standard algorithm for addition and subtraction until later in the year. This is a good thing! There are several developmental steps that students should move through before being introduced to the algorithm. This post focuses on the progression for teaching subtraction with regrouping.

Not surprisingly, we build understanding for the standard algorithm by starting with hands-on, concrete learning. Base-10 blocks are a great tool for modeling the process. Begin with problems that don’t require regrouping. So, for example, to solve 45 – 14, students would build 45 and remove 1 ten and 4 ones. Be sure to stress place value language during this phase of instruction—subtracting with regrouping is all about place value!

Give students plenty of practice using base-10 blocks for problems that don’t require regrouping before moving on to the next step. You want students to develop the understanding that we subtract ones from ones and tens from tens. Notice that the problem is written horizontally. Stacking the numbers in a vertical format will come later.

Next up, you want to introduce a problem that will require regrouping. You can get even more bang for your buck by introducing this next phase using problem-solving. Pair up students and ask them to use their base-10 blocks to solve 45 – 18. Right away they will likely realize that the process they have been using doesn’t work with this problem—they only have 5 ones, so they can’t subtract 8. Hence the problem. All I really need is for at least one pair of students to realize that they can trade a ten for ten ones and my lesson is gold! All of the students get the opportunity to grapple with the problem, the students who solve it can share out what they did, and then I can come in behind and reinforce the concept—if there are not enough ones to subtract, I can trade, or regroup, a ten for ten ones. Then they practice with additional problems requiring regrouping.

It’s not necessary that every student understand every strategy. The purpose of invented strategies is to allow students to use the strategy that makes sense to them!

It’s finally time to introduce the standard algorithm. A word of caution—don’t begin this process until students have a very strong understanding of regrouping using direct modeling.

We often use a strategy called partial sums for addition, and we can use the same process for subtraction. This strategy involves using expanded form to work with the value of the digits. When adding, it looks like this:

Using the same idea, subtraction without regrouping is pictured below. We write the numbers in expanded form, subtract the ones and the tens, and then write the expanded form answer using standard form.

When regrouping is required, students use their experiences with direct modeling. They realize they can’t subtract 8 ones from 7 ones. They also know that 5 tens and 7 ones have the same value as 4 tens and 17 ones. So now they can record it as shown below. Notice how it really sets them up for success with the standard algorithm.

Finally, after students have had plenty of practice using this expanded form procedure, we can come in and put the standard algorithm right alongside it.

Students can solve problems using both methods side-by-side until they are comfortable with the standard algorithm and can explain the place value concepts behind regrouping. At that point, they are ready to use the standard algorithm. Do not move to 3-digit numbers until students have a very strong understanding of the process using 2-digit numbers. Remember, slow and steady wins the race!

So there you have it—your roadmap for introducing the standard algorithm for subtraction. I’d love to hear your thoughts, so drop a comment below!