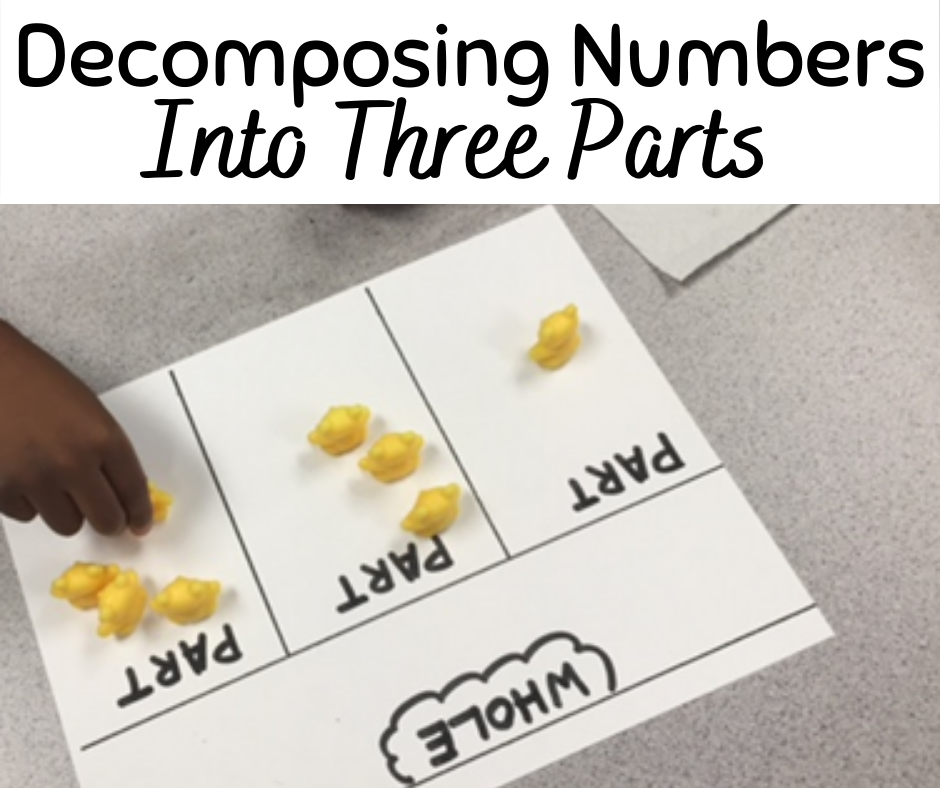 I’ve been working with my Firsties on composing and decomposing numbers, and we are currently working on combinations for eight. I decided to take it in a different direction this week and work on decomposing into three parts, so I made a part/whole mat with three parts. You can download a free mat at the end of this post.

The lesson started as I handed out the materials. I handed out the part/whole mats, and I gave the first student a handful of teddy bear counters, which turned out to be 5. How many bears do you have? Five. How many should I give you if you need 8? Three. This was a great formative assessment. I gave each student a different number of bears, and most counted on to determine how many to make 8. One student was clearly stumped. I had given him 3 bears, and he guessed several different numbers. I suggested that since we needed to make 8, he might try counting on from 3 to 8. He was able to do that with prompting. Next time, I would probably give him a number closer to 8.

I asked the students what was different about this part/whole mat, and they all quickly answered that it had three parts. I always like to insert questions that allow students to make and communicate observations. We started will all of our bears in the Whole section. I directed the students to move 3 bears to the first part and 2 bears to the second part. I then asked how many bears would be in the third part. Some students seemed confused by this, while others immediately realized it would be 3. This was a great opportunity to allow the students who understood to share their thinking: I knew it was three, because there were three bears left in the Whole section. Next, I modeled writing an equation to match our model. Again, some students were confused that we could have two plus signs. They wanted to put an equal sign after 3 + 2. By the way, they love writing with markers on the tabletop. So much better than a piece of paper! 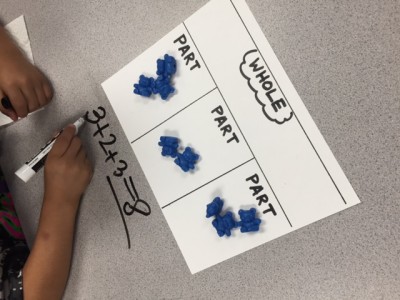 After we practiced several like this, I told them excitedly that we were going to try something different. I gave them only the first part, and let them choose how many bears to put in the other two parts. I reminded them that they might have a different combination than their neighbor, and that was okay. I gave them 1 for the first part to allow them maximum flexibility in their other parts. After they completed their equations, I had them read them and I wrote the equations on my easel. I pointed out that within 1 + 4 + 3, I saw 1 + 7. I also asked them to describe how their equations were alike and different.  For example, SJ and Malik both used 4 and 3, but they “flip flopped” them. 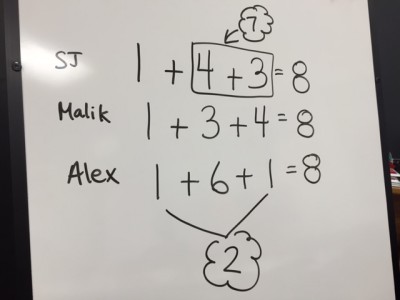 To end the lesson I told them I had a WILD idea! I was not going to give them any of the parts–they could totally make up their own. You would have thought it was Christmas.

You can download a FREE mat here. I’d love to hear what activities you use for three addends. Please share in the comments!

← Prev: The Standards...Stairsteps to Success Next: Understanding the Process Standards/Mathematical Practices →