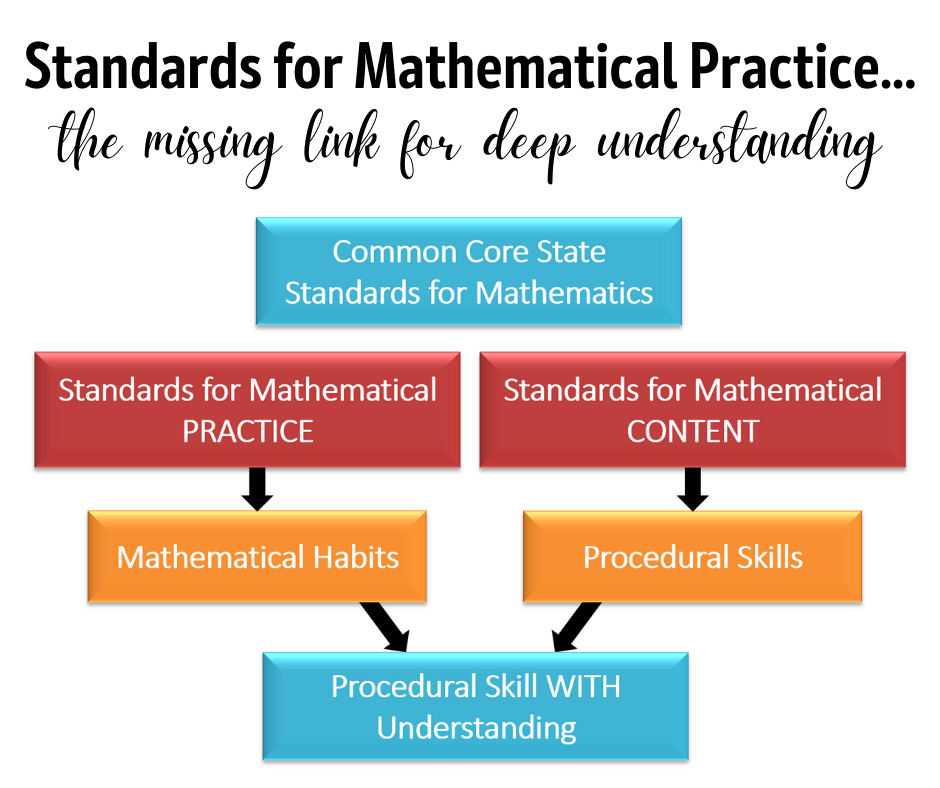 The Standards for Mathematical Practice describe varieties of expertise that mathematics educators at all levels should seek to develop in their students. These practices rest on important “processes and proficiencies” with longstanding importance in mathematics education. (CCSS 2010)

The practices are based on the NCTM process standards and the strands of mathematical proficiencies from the National Research Council’s report Adding It Up. In Texas, we call the practices “process standards”, and they’ve been part of our TEKS for years.

It may be helpful to understand the purpose of both the practice and content standards. The content standards define the procedural skills students must master at each grade level. For example 2.NBT.3 and 2.NBT.4 tell us a second grader must be able to read, write, and compare three-digit numbers written in a variety of formats (base-ten numerals, number names, and expanded form). The practice standards, on the other hand, define the habits that mathematicians employ when doing their work. Let’s look at how some of the practices come into play in relation to that same standard:

Do you see the difference? We often teach specific strategies for comparing numbers, resulting in kiddos who might master the content skill, but don’t necessarily understand the process. Even though we ask them to “show their work”, they don’t necessarily develop a deep understanding of the concepts and their “work” doesn’t always show us what they do and don’t understand. But when the Mathematical Practices are thoroughly embedded into all areas of instruction and kiddos are asked to explain and defend their solutions on a regular basis, they make sense of the math they are doing. And when they understand the math they are doing, they become better problem solvers. That is a huge shift in thinking about instruction, and it takes lots of practice and modeling!

Embedding the mathematical practices into our instruction is our greatest challenge in teaching mathematics, but it is absolutely essential if we are to develop our students as mathematicians. Start this week! Do more with less. What I mean by that is have kiddos do fewer problems, but do more with them–more explaining, more defending, more TALKING!

I would love for you to add comments throughout the week about small changes you have made to your instruction to begin emphasizing the mathematical practices–or what you’re already doing! We can all learn from hearing what others are doing. 🙂