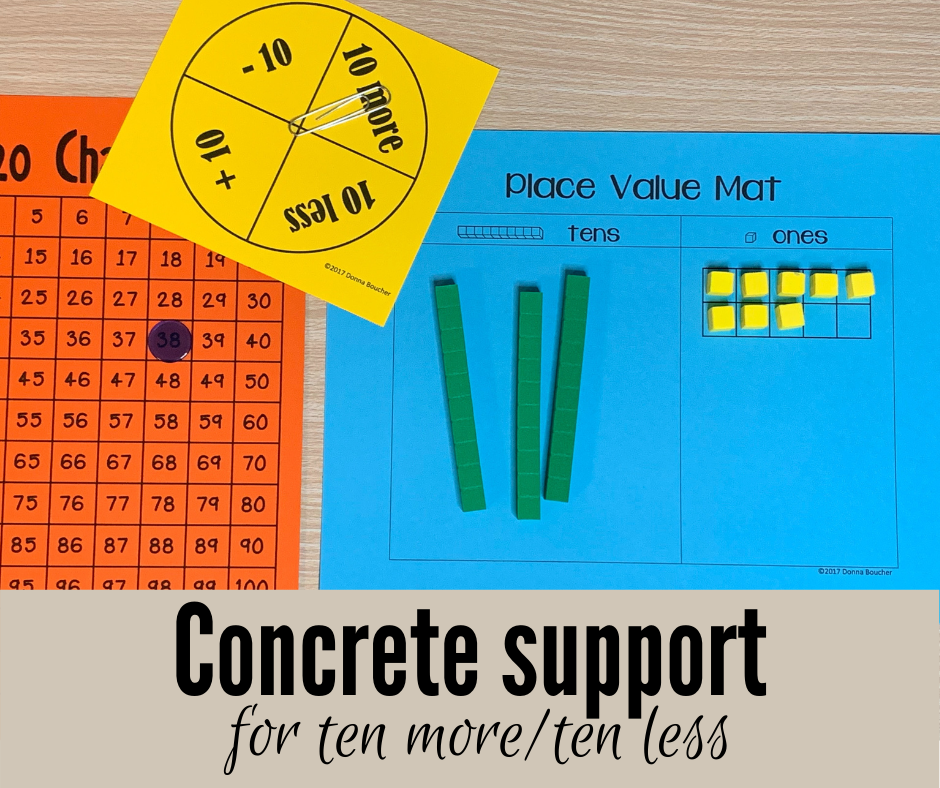 This week, I’ve been working on ten more and ten less with my firsties. The purpose of ten more/ten less and one more/one less activities is really to develop an understanding of place value. When we find the number that is ten more or ten less, only the tens place changes. That seems so obvious to us that we sometimes forget that it’s a difficult concept for a child to learn. New learning occurs best, and is most meaningful, when accompanied by concrete support and hands-on experiences.

I decided to play a well-known game called Race to the Bottom. To play, all you need is a 100 or 120 chart, a spinner with sections for 10 more and 10 less, and some counters for the students to mark their spaces. I like to use transparent discs, so they can still see the number underneath. Each player places their disc on any number, except 10, on the first row. I explain that the number doesn’t really matter. For example, choosing 9 doesn’t help a player win any more than 3 would. Players take turns spinning the spinner and moving their playing piece to reflect either 10 more or 10 less than their current number. The first player to reach the bottom row wins. 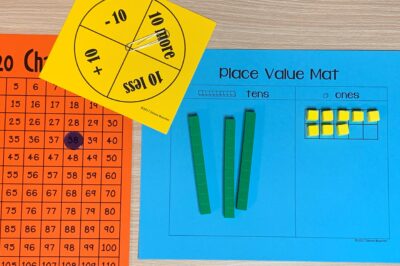 So, like I said, you’re supposed to have a spinner, but when we got ready to play, I couldn’t find it. Thinking on my feet, I decided that we would roll a die. If the number rolled was even, they would add 10 more to their number. If the number rolled was odd, they would subtract 10 from their number. Of course, this led to a mini-lesson on odd and even, so I actually got to practice two skills with one game!

I had linking cubes close by (doesn’t everyone?), so I counted out 10 cubes. They were green, so we pretended they were green M & M’s. The students took turns taking cubes, checking each time to make sure their piles were equal. They found that they could split 10 into 2 equal piles, so we added it to our Even column. I pulled all the cubes back together, sneakily pushed one off to the side, and asked, What if we had nine M & M’s? They went through the same process as before and saw that they would each get four and one would be left. The odd man out. We added nine to the Odd column. We continued this for every number down to one. You might think you could stop after demonstrating with a number or two, but they really need to experience the concept at the concrete level for understanding to take hold. 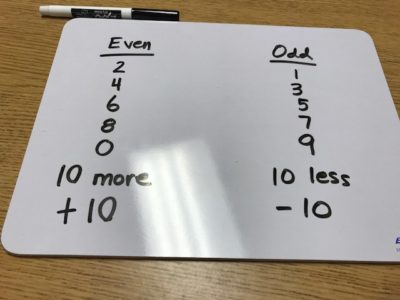 With our list of odd and even numbers, we started to play the game. I had each student build their original 1-digit number on their place value mat using base-10 blocks.

Just a side note about base-10 blocks. Although they are concrete materials, they are quite abstract because students can’t physically break apart the ten into ones (unless you get interlocking sets). We have worked extensively throughout the year with linking cubes and ten frames to help students understand the concept of tens and ones.

Back to the game. Each time the students rolled the dice and had to add or subtract ten, they showed the change on their place value mat using their base-10 blocks. They quickly realized that each time they only added or took off a ten–the ones did not change. I also had them repeat the phrases ten more, plus 10, ten less, and minus ten with each roll to help build academic vocabulary. We quickly noticed that when using the dice we got way too many odd numbers, and we weren’t getting anywhere. So I switched to cards showing the numbers from 1-9, and I left more even numbers than odd numbers in the deck. It was a lot more fun after that! It was high drama when they got an odd number. You have to love it when kiddos beg to play a math game.

You can grab a free copy of the place value mat, 120 chart, and spinner and use this in your classroom tomorrow! Just don’t skip the concrete support. 🙂