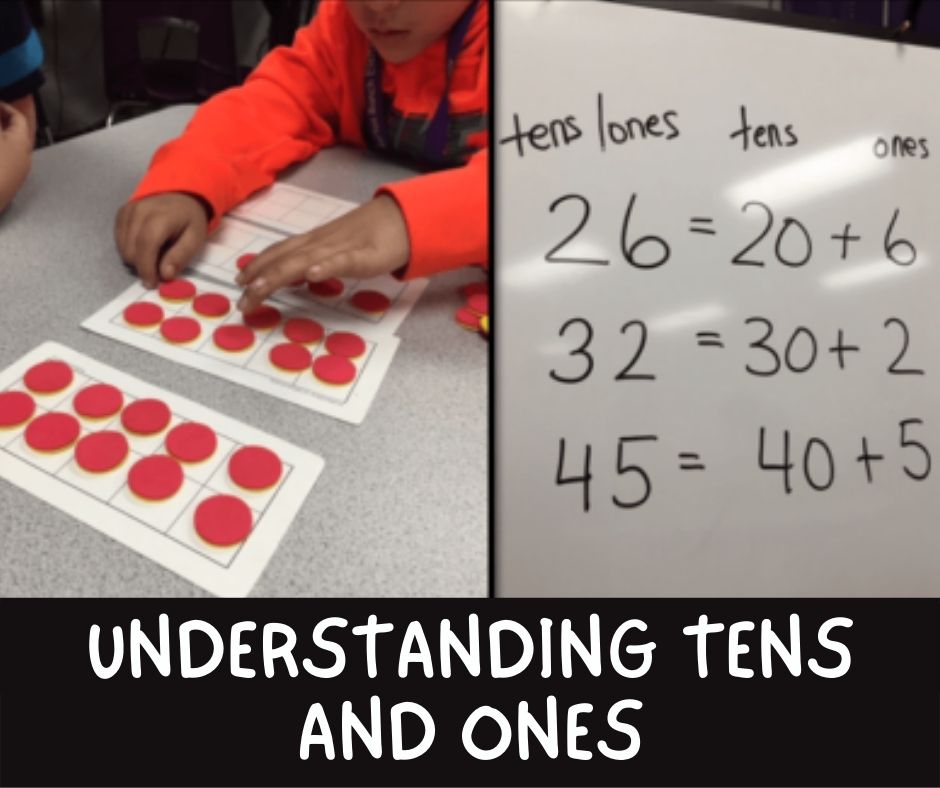 I’ve been working with my firsties on understanding numbers to 50. We’ve practiced counting forwards and backward, writing and reading the numbers, as well as comparing numbers. By far our biggest challenge, however, has been understanding the meaning of the digits in a 2-digit number. Children can count out 26 counters and relate the counters to the number 26 long before they understand that the digits represent 2 tens and 6 ones. We have been using linking cubes and ten-frames to try to make meaning of these early place value understandings.

Here’s what we were up to today. I gave each pair of students four empty ten-frames and a pile of counters. I asked them to talk to their partner and decide what the biggest number would be that they could show with their ten-frames. This turned out to be a great question!  It was an awesome formative assessment. As I listened to the conversations, I heard that some students immediately said 40, while other responses were all over the board (20, 100, 50, etc.). I reminded students that they needed to explain their answers, even when talking with a partner (“I think it’s 40 because…”). Since several students were struggling with a reasonable estimate so I scaffolded…

[Adding a second ten-frame] Okay, if I have two ten-frames, what’s the biggest number I could show? (20)

At this point, I thought they would make the connection, so I asked them to look at their ten-frames, talk with their partner, and decide the biggest number they could show with four ten-frames. They still did not come up with 40. This was fascinating to me! Once again I repeated my questions about one and two ten-frames. I added a third empty ten-frame and asked what the largest number I could show would be (30). I then asked them the original question again (“What is the largest number you could show with your four ten-frames?”). They finally decided 40, but this just shows how much support our students need to truly understand place value!

Back to the planned lesson…I wrote the number 26 on my whiteboard and chose a student to read the number. I have learned not to assume students can read 2-digit numbers when they see them in isolation. Then I asked the students to work with their partners to build the number. While all the students successfully built the number, it was fascinating to see that most students were counting by ones as they put their counters on the ten-frames. After they had built the number, I asked them if they had to count by ones and reminded them that if the ten-frame was full, it was ten. We continued practicing this throughout the lesson (“If it’s 26, how many filled ten-frames will you have? Which digit shows you how many filled ten-frames you will have?”).

On my whiteboard, where I had written 26, I wrote the equation 26 = 20 + 6. I asked the students to talk to their partners about what this equation meant. They were able to tell me that the 20 was the two filled ten-frames and the 6 was the counters on the ten-frame that wasn’t full. It is not obvious to children that a filled ten-frame can be called a ten, and that when we have two filled ten-frames it is two tens but represents 20 counters. HUGE concept and hurdle in understanding. 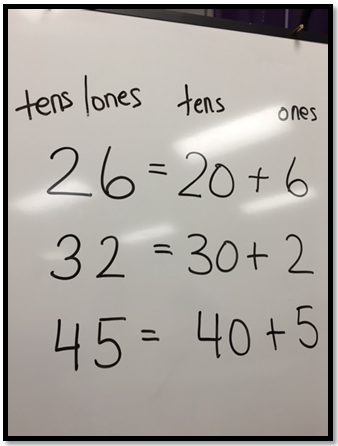 Next, I wrote 32 on the whiteboard and asked them to build the number. It was interesting to see that some students knew to fill another ten-frame automatically, while others were counting by ones. After building the number, I again asked how many filled ten-frames they had (3) and asked a student to help me finish the equation.

Finally, I thought I’d throw a little problem solving into the mix, so I wrote 45 on the board and asked them to build it (remember they only had four ten-frames). Some students just added 5 counters below the fourth filled ten-frame, but others were lost without another ten-frame to hold the five counters. So interesting. I gently led them through questioning and they figured it out.

As a final activity, I wrote 20 + 4 on the board and asked them to build it. I just wanted to see if they could look at it from the other perspective, and I thought it would help them better understand that the 20 is represented by 2 tens in the number.

This takes a LOT of practice! It is so important that students really understand these early place value concepts.

← Prev: Holiday Math Freebie Next: Another Look at 2-Digit Numbers →