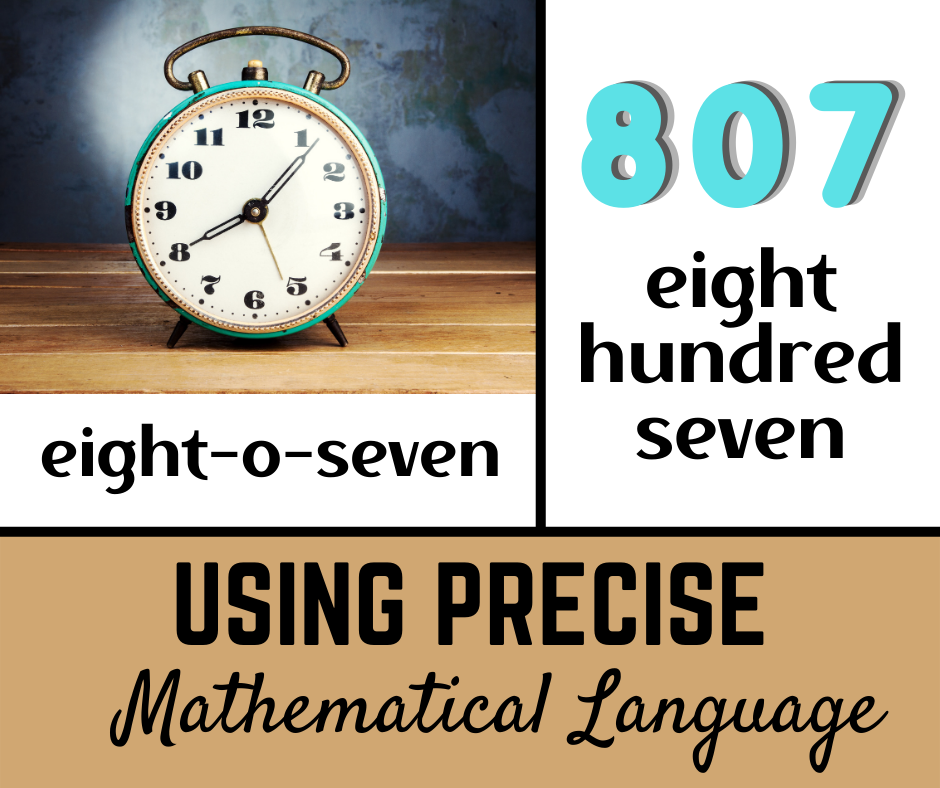 If we want students to use precise mathematical language (and we do!), then we have to be sure we model what that sounds like. Let’s look at some shortcuts we often take in our own language and see how they undermine our goal of having students deeply understand place value.

The essential understanding of place value is that digits take on different meanings based on their place value position. We teach students that an 8 in the ones place has a value of 8, while an 8 in the hundreds place has a value of 800. So how important is it, then, that we say the number 807 as eight hundred seven, rather than eight-o-seven? Very! When we take shortcuts naming numbers, we often strip all the place value meaning out of the number. No wonder students get confused. When numbers are spoken correctly, we should hear the place value of every digit.

We often do the same with decimals, reading the number 3.52 as three point fifty-two. I’ll be honest, if I am not in front of students, I’d say it the exact same way. But when I have my teacher hat on, I have to say three and fifty-two hundredths to emphasize the place value.

When you think about it, word form is really the same as spoken form, right? However a number is written in word form, that’s how we should consistently refer to it. 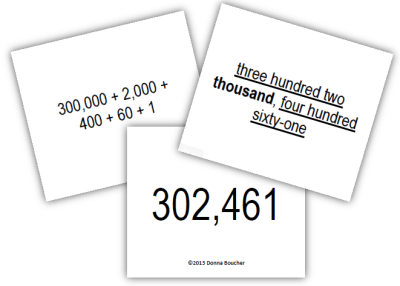 Do your students need practice with the different forms of numbers? You can grab free sets of these cards in 6-, 9-, and 12-digit versions by visiting this post.

It’s Not Borrowing if you Never Give It Back

Another area often devoid of precise place value language is adding or subtracting with regrouping. Consider this explanation for solving 423 – 158:

Boys and girls, when we subtract, where do we start? (on the right)
Correct–we always start all the way on the right.
I can’t subtract 8 from 3, so I’ll go next door and borrow.
The 2 changes to a 1, and the 3 becomes 13.

That’s probably how you learned to subtract. I know it’s how I learned. But it does nothing to help students understand the process of regrouping, which is all about place value. Contrast the previous example with this one:

Boys and girls, when we subtract using the standard algorithm, where should we start? (with the ones)
Why? (because it’s the smallest place value position)
What’s my problem? (we only have 3 ones so we can’t subtract 8 ones)
So what can I do? (trade a ten)
When I trade a ten, how many tens do I have left? (1 ten)
And what did I get when I traded a ten? (10 ones)
How many ones do I have now? (13, the 3 ones we had plus the 10 extra we got from trading a ten.)

Note that in the first sentence, I purposefully included the words standard algorithm. The reason for that clarification is that the requirement of starting with the ones is specific to the standard algorithm. There are other strategies for subtracting, such as splitting by place value, that don’t require you to start with the ones. Here’s an example of what Greg Tang refers to as “using funny numbers.” 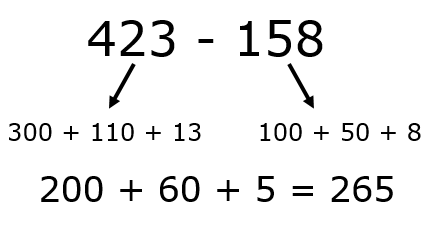 Also, I use regrouping and trading interchangeably when working with students. I find that trading helps them make sense of the action that takes place when we regroup.

Finally, I hope you notice one other difference between the two scenarios. Look how much talking the students are doing in the second one. That’s huge. It’s my way to determine how well they understand the process–my formative assessment. I want them to describe the process, not me.

If you’ve been taking shortcuts with mathematical language, I get that it’s hard to change deeply embedded habits. I remember when I first started teaching and I found out you aren’t supposed to say and in a number unless you are referring to the decimal point. What? No more two hundred and thirty-five? That’s right–just two hundred thirty-five. I had to unlearn a life-long habit of how I spoke numbers. Not easy, but important. To this day, I still cringe just a little when I hear a news anchor throw an and into a number.

So let’s all take the pledge to be more precise in our mathematical language. After all, precision counts!